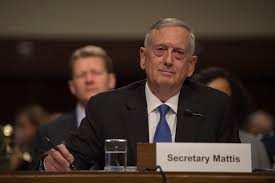 The uniform pattern was selected without evaluating its effectiveness when only 2.1 percent of Afghanistan is covered by forests, the U.S. government's top watchdog on Afghanistan said in a report last month.

The Afghan minister of defense at the time "liked the woodland, urban and temperate patterns," the report by the Special Inspector General for Afghanistan Reconstruction (SIGAR) said.

It potentially cost up to an additional $28 million dollars between 2008 and 2017, the watchdog said.

In a memo sent out to senior Pentagon officials on Friday and seen by Reuters, Mattis said the SIGAR report was an example of a "complacent mode of thinking."

"Cavalier or casually acquiescent decisions to spend taxpayer dollars in an ineffective and wasteful manner are not to recur," Mattis wrote.

"Rather than minimize this report or excuse wasteful decisions, I expect all DoD (Department of Defense) organizations to use this error as a catalyst to bring to light wasteful practices - and take aggressive steps to end waste," Mattis wrote.