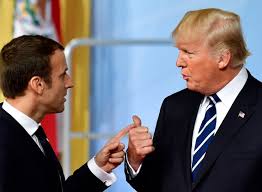 It is not Macron's business who is the Syrian president, but it is good that he thinks eliminating the terrorist threat is more important than ousting Bashar Assad in a regime change, says Lew Rockwell, editor of LewRockwell.com.

After the first day of meetings between President Donald Trump and his French counterpart in Paris, President Emmanuel Macron made a statement on how he sees a solution to the crisis in Syria, RT spoke to Lew Rockwell for his views on the meeting between the two presidents.

RT: Not long ago, Macron was saying Assad's exit was the only way to peace in Syria. Now he can stay, apparently. What's caused the sudden about-turn?

Lew Rockwell: First of all, I wonder why it is any of Macron's business who is the president of Syria? Why is it coming from this arrogant former colonial master? It is really quite an outrage. But I am glad it happened. I am glad he is saying that I hope he means it. I would like to think that maybe it comes from the talks between Mr. Trump and Mr. Putin. Can't know that, but that is my hope. President Assad, whatever his faults, is a protector of Christians and other religious minorities in Syria. And ISIS and America's 'moderate rebels' want to get rid of all the religious minorities, kill them and expel them from the country.