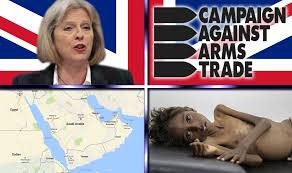 Activists from Campaign Against the Arms Trade (CAAT) have lost a high-profile case which called for the end of UK arms sales to Saudi Arabia on humanitarian grounds. The High Court ruled the Government is not breaking the law by continuing to sign off the sale of arms to Saudi Arabia.

CAAT's website states that Law firm Leigh Day, "…argued that a range of international organisations including the European Parliament and many humanitarian NGOs, have condemned the ongoing Saudi air strikes against Yemen, as unlawful." The site states that this is backed up by the fact that "In January 2016, a United Nations Panel of Experts accused Saudi Arabian forces of 'widespread and systematic' targeting of civilians."

CAAT also reports that half of the hearings were conducted in 'closed sessions' which neither the claimant nor their lawyers were given access to.

Regardless of the high civilian casualty rate, CAAT tells us that "…the UK has continued to arm the Saudi regime…" and that "Since the bombing of Yemen began in March 2015, the UK has licensed £3.3 billion worth of arms to the Saudi regime…". CAAT's website says this includes:

Andrew Smith of Campaign Against Arms Trade made this statement on the verdict:

"This is a very disappointing verdict, and we are pursuing an appeal. If this verdict is upheld then it will be seen as a green light for government to continue arming and supporting brutal dictatorships and human rights abusers like Saudi Arabia that have shown a blatant disregard for international humanitarian law.

Every day we are hearing new and horrifying stories about the humanitarian crisis that has been inflicted on the people of Yemen. Thousands have been killed while vital and lifesaving infrastructure has been destroyed.

This case has seen an increased scrutiny of the government's toxic relationship with Saudi Arabia. It is a relationship that more than ever needs to be examined and exposed. For decades the UK has been complicit in the oppression of Saudi people, and now it is complicit in the destruction of Yemen."