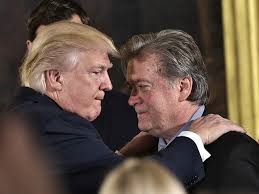 New York Magazine reported that Ailes, who died in May, sent his personal lawyer, Peter Johnson Jr., to Breitbart headquarters in D.C. to tell Bannon to stop running stories against then-Fox News host Megan Kelly, who questioned to President Trump during a primary debate about his behavior and language about women.

As The Hill reports, Bannon reportedly refused to call off the coverage, calling Kelly "pure evil" and saying that she would turn on Ailes one day.

"We're going full-bore. We're not going to stop. I'm gonna unchain the dogs," Bannon said, according to the magazine, before telling Johnson to "go back to New York and quote me to Roger. 'Go f--- yourself.'"

Ailes initially called Bannon after the debate over the negative coverage, saying that it wasn't "fair and it's killing us. You have to stop it," the magazine reported.

"F--- that, that was outrageous what she did!" Bannon reportedly said. "She pulled every trick out of the leftist playbook."