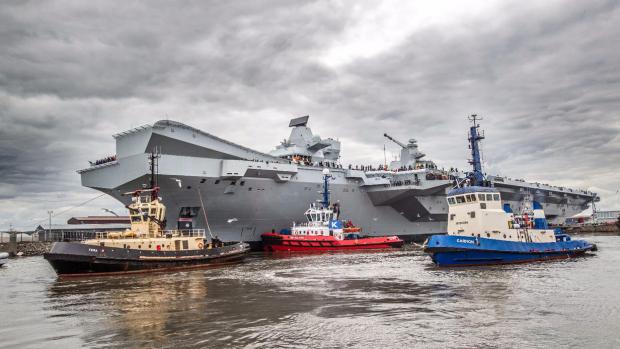 Under the guidance of a flotilla of super tugs, the aircraft carrier HMS Queen Elizabeth set out from Rosyth, Scotland on her first six-week sea trial off the northeast coast of Scotland to carry out initial tests of the future flagship's fundamental systems.

Today's departure marks a major milestone for the Queen Elizabeth and her sister ship HMS Prince of Wales, which is currently being fitted out. Each carrier is 280 m (920 ft) long, 70 m (230 ft) abeam, has a draught of 11 m (36 ft) with a flight deck big enough for three soccer fields and can manage a top speed of 25 knots (46 km/h, 29 mph). Though larger than the previous Invincible class carriers, they carry a smaller crew thanks to their heavily automated systems and networked design.

Today's trials aren't that much of a change for the approximately 700 crew that make up the present complement of HMS Queen Elizabeth. They have been living aboard ship for the past two weeks while carrying out watches and dry runs as if the carrier was already at sea. According to the Ministry of Defence (MoD), after completing the initial trials that will evaluate the carrier's speed, maneuverability, weapons, power and propulsion, the ship will return to Rosyth for testing and maintenance before heading south to her homeport at Portsmouth for formal transfer to the Navy later this year.