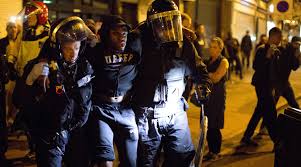 After holding a minute of silence Sunday evening, a large crowd of activists holding Black Lives Matter signs went on a rampage in the vicinity of Forest Gate police station near the spot where Edir Frederico Da Costa was detained by police on Thursday, June 15. His family alleges that the 25-year-old black man had died after being mistreated by the Metropolitan Police.

Eventually bricks were thrown at riot police lines. Street fires were also lit outside Stratford bus station and outside the police precinct.

Shouting, "We want justice," and "No justice, no peace, no racist police," the protesters stood face-to-face with police lines in full riot gear outside the station.

Meanwhile, firefighters rushed to the scene to extinguish the flames.

"A small number of roadway fires – involving the contents of litter bins – were started. These were dealt with by the London Fire Brigade. We are not aware of any damage to local buildings," the Metropolitan Police said in a statement, according to the Guardian.