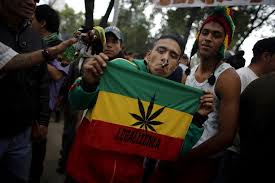 As a growing number of individual states in the U.S. stand up to the federal government on marijuana prohibition, Mexico legalized medical marijuana nationwide on Monday.

The decree stated that the nation's Ministry of Health would be in charge of "public policies regulating the medicinal use of pharmacological derivatives of cannabis sativa, indica and Americana or marijuana, including tetrahydrocannabinol, its isomers and stereochemical variants, as well as how to regulate the research and national production of them."

The measure was also applauded by Mexico's Secretary of Health, Dr. José Narro Robles. "I welcome the approval of the therapeutic use of cannabis in Mexico," he wrote on Twitter.

Mexico's President Slams Lockdowns As A Form Of "Dictatorship"

Mexico's President Slams Lockdowns as a Form of "Dictatorship"