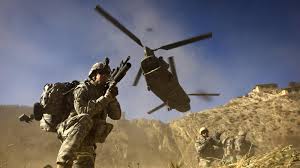 President Donald Trump is hesitating to agree to thousands of additional troops for the war in Afghanistan as recommended by his secretary of defense and national security adviser, according to a New York Times report over the weekend.

So, it's a good time to put aside, for a moment, the troop request itself and focus on why the United States has been fighting the Taliban since 2001 — and losing to them for well over a decade.

Some of the war managers would argue that the United States has never had enough troops or left them in Afghanistan long enough. But those very figures are openly calling for an indefinite neocolonial US military presence. The real reason for the fundamental weakness of the US-NATO war is the fact that the United States has empowered a rogues' gallery of Afghan warlords whose militias have imposed a regime of chaos, violence and oppression on the Afghan population — stealing, killing and raping with utter impunity. And that strategy has come back to bite the Pentagon's war managers.

The Taliban hold the same sexist ideas as many members of rural Afghan society about keeping girls out of schools and in the home. But the organization appeared in 1994 in response to the desperate pleas of the population in the south — especially in a Kandahar province divided up by four warlords — to stop the wholesale abduction and rape of women and pre-teen boys, as well as the uncontrolled extortion of tolls by warlord troops. The Taliban portrayed themselves as standing for order and elementary justice against chaos and sexual violence, and they immediately won broad popular support to drive the warlords out of power across the south, finally taking over Kabul without a fight.

Then in 2001 the United States ousted the Taliban regime — implicitly as retribution for 9/11, even though the Taliban leader Mullah Omar had not been informed of Osama bin Laden's plot and had strongly opposed any such plotting. Instead of forcing the warlords to give up their power or simply letting Afghan society determine the Taliban's fate, the United States helped its own warlord allies consolidate their power. President Hamid Karzai was encouraged to appoint the most powerful warlords as provincial governors and their private militias were converted into the national police. The CIA even put some of the militias on their payroll along with their warlord bosses to help track down Taliban and al Qaeda remnants.

These early US decisions created the plague of abuses by the "police" and other militias that has remained the underlying socio-political dynamic of the war ever since. Ron Neumann, US ambassador to Afghanistan from 2005 to 2007, explained the accepted rules for the warlords and the commanders of their militias toward those who are not part of their tribal in-group. "You take the people's land, their women — you steal from them — it's all part of one package," he told me in a 2009 interview.

It was not long before the Taliban began to reorganize for a second resistance to the warlords. From 2003 to 2006, they were taking the offensive across the Pashtun area of the south, with a rapidly increasing tempo of attacks.

1 Comments in Response to Why Afghanistan? Fighting a War for the War System Itself

The Taliban hates opium poppies-CIA converts it heroin and peddles it world-wide.