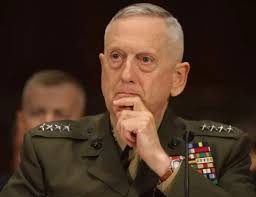 Defense Secretary James "Mad Dog" Mattis' recent announcement proves that President Donald Trump is giving him full control of the war in Afghanistan, and it should be keeping Islamic terrorists up at night.

Mattis told Congress Tuesday that the U.S. is "not winning" the war against the Taliban in Afghanistan, and Trump had one message for him: Do what you need to do to win.

Mattis said Wednesday he received authority from the president to set U.S. troop levels in Afghanistan.

It's a break from past practice that Mattis said will enable him to more effectively manage the war effort.

In testimony before a Senate panel, Mattis said the decision does not mean U.S. troop levels will change immediately. While he is expected to add at least a few thousand troops soon, Mattis said he will act after further consultation with other government agencies and in line with Trump's "strategic direction and his foreign policy."

The U.S. now has about 8,400 troops in Afghanistan performing two main missions: hunting and attacking violent extremists, including an Islamic State-affiliated group in eastern Afghanistan; and supporting Afghan combat forces against the Taliban.

Trump has said very little about his intentions in Afghanistan. The administration has been reviewing its options, and Mattis told the Senate Appropriations defense subcommittee that the mission remains the same: to train, advise and assist Afghan forces so that they can defend their own country and "terrorists can find no haven" there.

Later, he said he could imagine the U.S. helping train Afghan security forces "years from now," even after the country is stabilized.

President Barack Obama ended the U.S. combat role in Afghanistan in 2014. Throughout his administration and that of his predecessor, Obama's White House closely controlled U.S. troop levels in Afghanistan. Trump came into office saying he intended to give his generals more leeway, and Mattis has said the new authority will help him improve management of the war. In April, the president gave Mattis authority to set U.S. troop levels in Iraq and Syria.