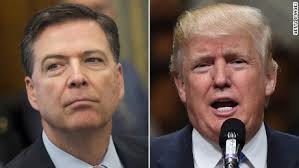 But Republicans elsewhere in the country say they couldn't care less.

Interviews with GOP activists across the country, including around a dozen attendees at this weekend's North Carolina Republican convention, reveal deep mistrust of Comey, who was investigating possible connections between Russia and the Trump campaign before the president fired him.

Comey, slated to appear before the Senate intelligence committee on Thursday, is also expected to respond to reports that Trump pressured him to give former National Security Adviser Michael Flynn a pass. Yet there is little Comey could say this week that would change how grassroots Republicans view the president.

Asked whether Comey has any credibility, he offered a view shared by many Republican activists gathered at this airy waterfront convention center: "None. Zero."