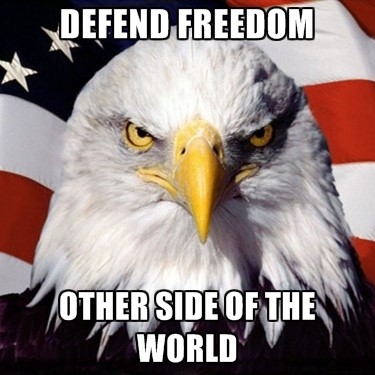 How often do we hear the claim that American troops "defend our freedoms"? The claim is made often by U.S. officials and is echoed far and wide across the land by television commentators, newspaper columnists, public-school teachers, and many others. It's even a common assertion that emanates on Sundays from many church pulpits.

Unfortunately, it just isn't so. In fact, the situation is the exact opposite — the troops serve as the primary instrument by which both our freedoms and well-being are threatened.

Let's examine the three potential threats to our freedoms and the role that the troops play in them:

Every competent military analyst would tell us that the threat of a foreign invasion and conquest of America is nonexistent. No nation has the military capability of invading and conquering the United States. Not China, not Russia, not Iran, not North Korea, not Syria. Not anyone. To invade the United States with sufficient forces to conquer and "pacify" the entire nation would take millions of foreign troops and tens of thousands of ships and planes to transport them across the Atlantic or Pacific ocean. No foreign nation has such resources or military capabilities and no nation will have them for the foreseeable future.

After all, think about it: the U.S. army, the most powerful military force in all of history, has not been able to fully conquer such a small country as Iraq because of the level of domestic resistance to a foreign invasion. Imagine the level of military forces that would be needed to conquer and "pacify" a country as large and well-armed as the United States.

I repeat: No foreign nation has the military capability to invade the United States, conquer our country, subjugate our people, and take away our freedoms. Therefore, the troops are not needed to protect our freedoms from this nonexistent threat.

Despite widespread fears to the contrary, there is no possibility that terrorists will conquer the United States, take over the government, and take away our freedoms. At most, they are able to kill thousands of people, with, say, suicide bombs but they lack the military forces to subjugate the entire nation or any part of it.

Equally important, while the troops claim that they are protecting us from "the terrorists," it is the troops themselves — or, more precisely, the presidential orders they have loyally carried out — that have engendered the very terrorist threats against which the troops say they are now needed to protect us. <

Think back to 1989 and the years following — when the Berlin Wall fell, East and West Germany were united, Soviet troops withdrew from Eastern Europe, and the Soviet Union was dismantled. The Pentagon didn't know what to do. Unexpectedly, its 50-year-old "official enemy" was gone. (The Soviet Union had previously been America's "ally" that had "liberated" Eastern Europe from Nazi Germany.) With the fall of the Soviet empire (and, actually, before the fall), the obvious question arose: Why should the United States continue to have an enormous standing army and spend billions of dollars in taxpayer money to keep it in existence?