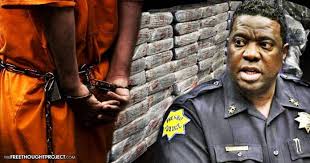 This point is made recently in Fresno, California as the former Deputy Police Chief, one of the most trusted men in town, was found guilty on federal drug trafficking charges.

To be clear, the Free Thought Project has reported on the atrocities and unintended consequences of the prohibition of arbitrary substances by the state. So, someone providing a willing adult with a product that they want for themselves is not morally wrong, as there is no victim.

That being said, however, when a person who claims the legal authority to kidnap, cage, and kill you over those substances — uses their authority to deal in those very substances — this is not only hypocritical, it is tyrannical.

Deputy Keith Foster is one of these individuals who locked people in a cage for things he was doing himself — but on a much larger scale.