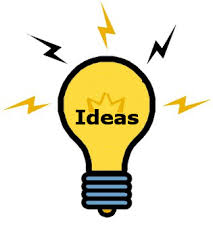 Ideas and reason do not motivate people, I am told. Appeals to self-interest and emotion are the only effective way to communicate. It is a false dichotomy, of course, to pit reason against emotion as though a reasoned argument cannot also be a passionate one. The contention should be dismissed on its face. But the argument remains: ideas do not move people; self-interest does.

With no sarcasm, I must ask "what reality do such people live in?" They cannot live in my world, which has been defined by ideas like Christianity, Marxism, democracy, Islam, equality, property rights... I see ideas everywhere. I walk by churches, I go to my local farmers' market, people I pass are arguing politics, a restaurant is vegetarian, a friend shuns me for doubting the "rape culture" concept, a woman wears a hijab, my husband does volunteer work,....ideas never end. It is impossible to escape their power because a culture itself is nothing more than a collective set of beliefs and the various expressions of those beliefs.

As for changing society...ideas spark revolutions. The Bolshevik Revolution was rooted in ideas advanced by a very small number of people. A handful of radicals ignited a nation. The populace may have cleaved to ideas because they explained their terrible oppression...but they cleaved to 'IDEAS.' People will march into the streets, ready to die, under banners reading "Justice! Freedom! Equality!" They do not die under banners reading "Minimum Wage!"

Pitting ideas against self-interest is also a false dichotomy, of course, although a less obvious one than reason v. passion. For one thing, self-interest is itself an idea that differs from person to person. For another, humans are rational animals to whom ideas, learning, understanding are inherent drives. Witness the joy of a child who solves a puzzle and you see the joy of ideas that is natural to man.

Satellite operator Viasat is calling for a stop to all SpaceX Starlink launches...

How Much Internet Data Do I Need When Living Off Grid? (2021 Update)

Android without Google? How is that Possible?

How Do I Find Broken Links? - Questions For Corbett #075

LG is quitting the smartphone business