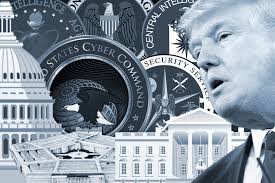 In the latest act of open deep state sabotage to undermine the Trump administration, deep state operatives leaked classified information divulged by Trump in a private White House meeting to The Washington Post and The New York Times.

From The New York Times:

The intelligence disclosed by Mr. Trump … was about an Islamic State plot, according to the officials. A Middle Eastern ally that closely guards its own secrets provided the information, which was considered so sensitive that American officials did not share it widely within the United States government or pass it on to other allies.

Mr. Trump's disclosure does not appear to have been illegal — the president has the power to declassify almost anything. But sharing the information without the express permission of the ally who provided it was a major breach of espionage etiquette, and could jeopardize a crucial intelligence-sharing relationship.

In fact, the ally has repeatedly warned American officials that it would cut off access to such sensitive information if it were shared too widely, the former official said. In this case, the fear is that Russia will be able to determine exactly how the information was collected and could disrupt the ally's espionage efforts.

Saying "Mr. Trump's disclosure does not appear to have been illegal" means: "it was not illegal, but we're going to word it in a way that makes it seem like it could be."

The Washington Post said Trump discussed "details of an Islamic State terrorist threat related to the use of laptop computers on aircraft."

Back in March, the threat of terrorists hiding bombs in electronic devices triggered the US and the UK to ban a host of electronics from being carried in cabins on flights from several Middle-Eastern countries.

The U.S. restrictions were prompted by a growing concern within the government that terrorists who have long sought to develop hard-to-detect bombs hidden inside electronic devices may have put renewed effort into that work, according to people familiar with the matter, who spoke on the condition of anonymity because they were not authorized to talk about it. U.S. officials have been discussing whether to issue new security restrictions for some flights for the past two weeks, they said.

How American Journalism Became A Mouthpiece Of The Deep State

Insider View: The Tragedy of the U.S. Deep State