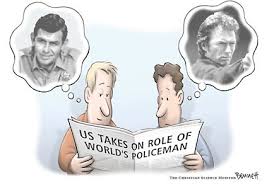 The attack on Pearl Harbor, Dec 7, 1941, united the nation as it had never been before — in the conviction that Japan must be smashed, no matter how long it took or how many lives it cost.

After the defeat of the Axis powers in 1945, however, Americans divided.

Only with the Berlin Blockade of 1948, the fall of China to Mao and Russia's explosion of an atom bomb in 1949, and North Korea's invasion of the South in 1950, did we unite around the proposition that, for our own security, we had to go back to Europe and Asia.

What was called the Cold War consensus — that only America could "contain" Stalin's empire — led to NATO and new U.S. alliances from the Elbe to the East China Sea.

The far left of the Democratic Party that had taken us into Vietnam had repudiated the war by 1968, and switched sides to sympathize with such Third World communists as Fidel Castro, Che Guevara, Ho Chi Minh and the Sandinistas.

Center-right presidents — JFK, Nixon, Reagan — accepted the need to cooperate with dictators who would side with us in fighting Communism.

And we did. Park Chung-Hee in Korea. The Shah in Iran. President Diem in Saigon. Gen. Franco in Spain. Somoza in Nicaragua. Gen. Mobuto in the Congo. Gen. Pinochet in Chile. Ferdinand Marcos in Manila. The list goes on.

Under Reagan, the Soviet Empire finally fell apart and the USSR then disintegrated in one of the epochal events of history.

The American Century had ended in America's triumph.

What Dean Acheson had said of our cousins in 1962: "Great Britain has lost an empire and has not yet found a role," was true of us.

What was our role in the world, now that the Cold War was history?   George H.W. Bush took us to war to drive Saddam Hussein out of Kuwait. Soaring to 90 percent approval, he declared America's new role was to construct a New World Order.

Those who opposed him, Bush acidly dismissed in Hawaii on Dec. 7, 1991, the 50th anniversary of Pearl Harbor:

"We stand here today on the site of a tragedy spawned by isolationism. … And it is here we must learn — and this time avoid — the dangers of today's isolationism and its … accomplice, protectionism."

Neither Bush nor his New World Order survived the next November.