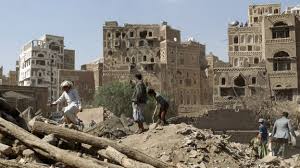 Close to half a million children suffer from severe acute malnutrition, a life-threatening condition that has seen a drastic increase of 200 percent since 2014," the report also stated, adding that health care, education, and social systems have deteriorated during the war.

Alongside this starvation crisis, is the high number of civilian casualties during the continuing conflict in Yemen. At least 4,773 civilians have been killed over the last two years and an additional 8,272 have been injured.

US foreign policy is playing a direct role in the starvation and murder of thousands of innocent civilians.

In an effort to ensure power to Yemeni President Abdu Rabbu Mansour Hadi, a Saudi-led coalition has been relentlessly attacking Yemen, targeting heavy military action toward Houthi rebels resistant of a Hadi government which has effectively accelerated the country's humanitarian crisis.