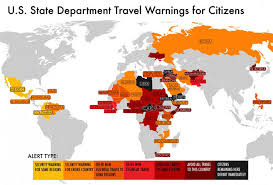 In a rather unexpected move, the United States has now issued a terror alert warning citizens about travel throughout the European Union, and — while the warning recalls relatively recent incidents in France, the UK, Russia, and Sweden — its timing, amid hostilities with North Korea and others, implies an ominous prognostication, rather than cautionary heads-up.

For the U.S. Department of State to issue such a warning — unconnected in immediacy to any specific incident in the E.U. — appears to adhere to guidelines of past warnings, in that its impetus likely rests in credible babble of an imminent threat to life.

"While local governments continue counterterrorism operations," the U.S. Department of State's newest Travel Alert reads, "the Department nevertheless remains concerned about the potential for future terrorist attacks. U.S. citizens should always be alert to the possibility that terrorist sympathizers or self-radicalized extremists may conduct attacks with little or no warning."

Interestingly, while the State Department admonishes citizens operatives of the Islamic State could strike at any time, it also cautions specifically against militants of al-Qaeda — the War on Terror's original Enemy Number One — a group which now claims to be fighting alongside the U.S. in Yemen, among other locations.

"Terrorists persist in employing a variety of tactics, including firearms, explosives, using vehicles as ramming devices, and sharp-edged weapons that are difficult to detect prior to an attack."

Indeed, caution is necessitated — arguably, everywhere the United States continues fighting militarily in answer to political woes — and although the most dangerous locales undoubtedly lie in direct conflict zones, it is interventionist, imperialist foreign policy to blame for safety concerns.