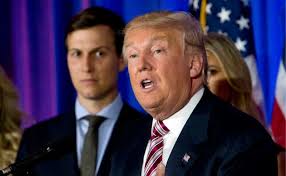 He cited the outing of General Flynn, the demotion of Stephen Bannon, Gorka and others, as evidence that something was happening inside the White House to silence the movement that got Trump elected.

Moreover, Dr. Pie warned the U.S. military was 'out of control', waging and fomenting wars in five different countries.

Interestingly, he mentioned how $KBR was in countries that the United States had no interest in for the sole purposes of looting it (I am long KBR).

Now on the important matter of Jared Kushner.

Pieczenik said the Kushner family is an 'incredibly corrupt family' that cannot be allowed in the White House. Jones said Trump's sons are 'total patriots' and have been leaking information to Mike Cernovich and others.

"Trump is for real, but he is being pulled by every side. There is an attempt to have a soft coup against the President,' said Jones.