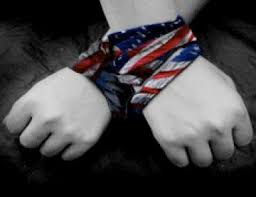 We have now had a Democratic president who sold out the people who elected him and a Republican president who has done the same thing. This is a very interesting point, the meaning of which most people miss.

But not Russia's president, Vladimir Putin. At the Valdai discussion club, Putin summed up Western democracy, which I paraphrase as follows:

In the West, voters cannot change policies through elections, because the ruling elites control whoever is elected. Elections give the appearance of democracy, but voting does not change the policies that favor war and the elites. Therefore, the will of the people is impotent.

People are experiencing that they and their votes have no influence on the conduct of affairs of the country. This makes them afraid, frusrated, and angry, a combination of emotions that is dangerous to the ruling elite, who in response organize the powers of the state against the people, while urging them with propaganda to support more wars.

1 Comments in Response to American Democracy: A Dead Man Walking

Get rid of democracy. Apply pure representation in the form of: The only time a person has to do what Government says is if there is a literal threat to other people that can easily be seen by everyone, or if the person has injured someone else directly or by damaging his property.