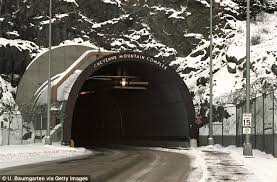 In the background of Colorado Springs, Pike's Peak dominates the sky. But just to that mountain's southeast looms another geological ripple. Cheyenne Mountain—a rounded, rocky thing that rises 9,565 feet above sea level—looks wild and quiet. But deep inside the mountain, a crew of humans toils in one of the nation's most secure military installations. Shielded by 2,500 feet of granite, these people gather and analyze data from a global surveillance system, in an attempt to (among other, undisclosed things) warn the government's highest officials of launches and missile threats to North America.

Their military mole-city, completed in the mid-1960s amid Cold War worries, is—when fully buttoned-up—highly resistant to nuclear bombs, electromagnetic bombs, electromagnetically destructive behavior from the sun, and biological weapons. It's designed to do its job, and let those inside do theirs, in the worst of worst-case scenarios. And with escalating fears about North Korean aggression and nuclear capabilities, Cheyenne Mountain's ability to predict and survive a nuclear attack resonates more than it did just a few months ago.

As I drive up the hairpinned road toward the entrance to the mountain, made famous in fictional form by War Games and Stargate, signs warn me off with increasing aggression. But I'm allowed: I'm here for a rare tour of the mountain's innards.

When I arrive at the visitor check-in, Fox News plays on the overhead TV. A sign beneath says not to change the channel, and a uniformed officer reads me a document that says I can't have explosives and that the employees can use deadly force to protect the site. Fair enough.

Soon, badge on blazer, fully briefed, I walk with four escorts—two men who are civilians and two women who are military officers—toward this constructed cave. It is, perhaps, the place on this planet most able to cut itself off from the rest of Earth. And the hardest part for those who work there is not spending all their time subterranean but knowing that in those worst cases—of which "North Korean nukes" is the example most used during my visit—everyone they care about will be outside the thing that's keeping them safe.

Pence Declines CPAC Invitation After Trump Confirms He Will Attend