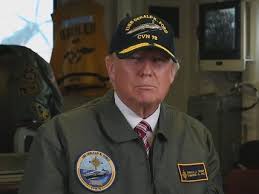 Maybe Trump believes that he's scared the evil Russians and the too big for their sampans Chinese into obedience.

His 22,000 lb MOAB terror bomb on Afghanistan should keep those pesky Taliban quiet for a while even though the Pentagon claimed the intended target was a group- Khorosan – that may not actually exist.

Those major malefactors, the crazy North Koreans, could be about to feel America's full military might if they so much as twitch.

Not content with nearly stirring up a new war with North Korea, President Donald Trump is now waving the big stick at another of Washington's favorite bogeymen, Iran. For the Trumps, Iran is poison.

In recent days, President Trump has threatened to renounce the six-power nuclear agreement to freeze or shrink Iran's nuclear infrastructure. This sensible pact was signed during the Obama administration by the great powers: US, Britain, France, Russia, Germany and China. Trump appears willing to abrogate the treaty and outrage the other great powers just because he hates Iran for some reason and, it appears, Muslims in general.