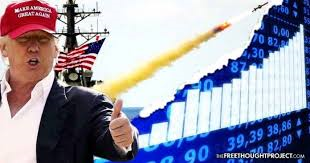 "Critical munitions shortfalls are my top war-fighting concern," says US Pacific commander Admiral Harry Harris. "We must maintain our capability to operate in contested environments."

This is nothing new.

Obama ran out of bombs, too.

As the U.S. ramps up its campaign against the Islamist terror group in Iraq and Syria, the Air Force is now "expending munitions faster than we can replenish them," Air Force chief of staff Gen. Mark Welsh said in a statement.