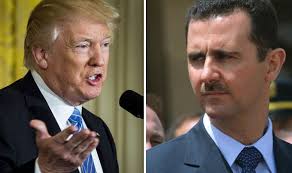 US president Donald Trump is not a truly independent political leader but merely a puppet of US corporations, military and intelligence, and who serves their interests, Syrian President Bashar Assad has told the Latin American TeleSUR TV network.

Trump pursues "no own policies" but only executes the decisions made by the "intelligence agencies, the Pentagon, the big arms manufacturers, oil companies, and financial institutions," the Syrian leader said in an exclusive interview with TeleSUR.

He referred to the fact that Trump came to power on a political platform promising a departure from the interventionist policy of the previous US president, Barack Obama, but soon forgot his promises and ordered a missile strike against the Syrian air base following a chemical weapons incident in Syria's Idlib province.

The Syrian president also said that it is "a complete waste of time to make an assessment of the American president's foreign policy" as "he might say something" but what he really does depends on "what these [US military and business] institutions dictate to him."

He also added that it "is not new" and "has been ongoing American policy for decades."

"This is what characterizes American politicians: they lie on a daily basis… That's why we shouldn't believe what the Pentagon or any other American institution says because they say things which serve their policies, not things which reflect reality and the facts on the ground," Assad told TeleSUR.

He went on to say that the US continues to pursue its age-long policy aimed at establishing and maintaining a global hegemony by turning all countries that oppose it into war zones.

"The United States always seeks to control all the states of the world without exception. It does not accept allies, regardless of whether they are developed states as those in the Western bloc or other states of the world," the Syrian leader explained.