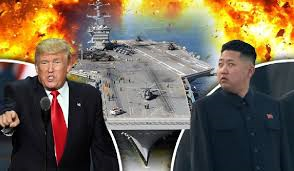 After the 'Communist' label and racial epithets were applied to dehumanize the populace, the US essentially wiped North Korea off the map, with hundreds of thousands or (more likely) millions of North Koreans killed by US mass-shootings, fly-by bombings, strafings, possible biological warfare, crops being wiped out, and the dumping of hundreds of tons of napalm (a fiery gel that sticks to targets), which drove the country's peasant population under ground.

While this is generally referred to in the US as the "Forgotten War", the victims tend to remember it more clearly and have built a security regime centered on deterring the next attack by history's biggest military empire.  However, scholars have also pointed out that when the US becomes less belligerent towards NK, the NK regime in turn decreases its belligerence.  This was particularly evident in the contrast between the policies of the Clinton and Bush regimes.  As Clinton decreased US belligerence towards NK, NK became significantly more conciliatory.  But when Bush Jr. entered office and renewed threatening rhetoric, NK responded in kind, conducting missile tests and honing its nuclear deterrent.

With the Trump regime now making fresh threats (which are illegal under international law) and sending more heavy weaponry towards NK, Cumings writes: