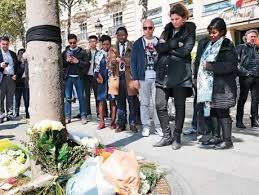 Bloodshed had long been feared ahead of Sunday's first round of the election after a string of attacks since 2015, and the shooting propelled the jihadist threat to the fore.

A note praising Islamic State (IS) was found near the body of the 39-year-old French attacker, who shot dead one officer and wounded two others before being killed by police.

The note bolstered IS's claim that the perpetrator, named as Karim Cheurfi, was one of its "fighters".

Far-right leader Marine Le Pen -- who is locked in a tight four-way contest with centrist Emmanuel Macron, conservative Francois Fillon and Communist-backed firebrand Jean-Luc Melenchon -- moved quickly to present herself as the toughest of the four on terrorism.

The 48-year-old National Front leader called for France to "immediately" take back control of its borders from the European Union and deport all foreigners on a terror watchlist.

"This war against us is ceaseless and merciless," she said in a sternly-worded address, accusing the Socialist government of a "cowardly" response to the threat.