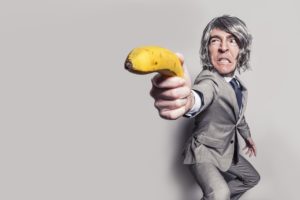 An unhinged Missouri School of Journalism professor has declared that the National Rifle Association is more dangerous than ISIS.

In an article published in the Missourian, Professor George Kennedy compared ISIS tactics of killing people, often by beheading or suicide bombing to lobbying politicians.

The professor, who is paid to educate, continues on to answer the question of which organization is the greater threat to the safety of Americans.

Now, most rational human beings would not even see a need for a list to know that a terror organization is more dangerous than a group aiming to protect the Second Amendment, but Kennedy is on another level.

Kennedy asserts that the average number of Americans killed per year is nine, ignoring the surge in mass tragedies such as the Pulse Nightclub shooting and San Bernardino attacks. He then blames the NRA for every murder in America, citing 11,737 "Americans killed by other Americans."

Perhaps realizing midway through his article that he sounds like a lunatic, Kennedy acknowledges what most readers were surely thinking.

"Now, you might object that it isn't fair to hold the NRA responsible for every misuse of a firearm. You might argue that the pro-gun passion of our politicians, especially but not only the Republicans, can't be attributed altogether to the clout of the NRA," Kennedy wrote. "You would be correct. There's plenty of blame to go around."

Still, Kennedy continues his bizarre piece by claiming that "there is no denying that the NRA is Missouri's and the nation's most vociferous, most generous to its friends and most vindictive to its enemies advocate of a free-fire zone for guns of all types in all places." Ultimately, he concludes that the NRA is a "danger to us all," after downplaying the threat of Islamic terrorism.