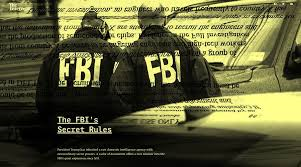 The deal, which brings to a close a four-year battle for the records under the Freedom of Information Act, is spelled out in two stipulations filed in San Francisco federal court – one on Friday and the other in January.

Julia Mass, an attorney with the American Civil Liberties Union of Northern California, which filed suit on behalf of the journalists, said in an interview Monday that her clients are pleased with the results.

But, Mass said, "it's unfortunate that we had to litigate so extensively in order to get the documents, and the documents themselves reveal a very troubling focus on our clients' political speech."

With the ACLU's help, Journalists Eric Garris and Dennis Raimondo sued the FBI in 2013, after they learned the agency was monitoring their libertarian news website Antiwar.com.

According to Garris and Raimondo, they learned about the surveillance after their names appeared in another FOIA request posted online. Documents in that request included an FBI memo revealing that the agency had conducted a threat assessment of the two men and Antiwar.com in 2004, and that an FBI analyst had suggested looking into whether their activity could "constitute a threat to national security on behalf of a foreign power."