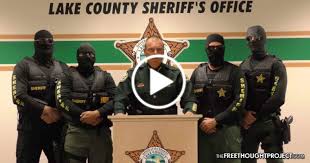 Lake County, FL — In a move that he will likely regret, Lake County Sheriff Peyton C. Grinnell will soon be internet famous for a threatening and poorly thought out Facebook video. The video, which is ostensibly meant to 'scare' drug dealers, has since begun to go viral — but for all the wrong reasons.

Claiming to have received multiple calls about heroin overdoses from the citizens, Sheriff Grinnell pledged violence and intimidation against those who'd dare sell the dangerous drug. As silly as the video may look, however, its implications and the ignorance behind its creation are no laughing matter.

"The gang in green with masks on. Probably worse than ISIS with their unconstitutional no knock raids," wrote one Facebook user.

Surrounded by his deputies in their tactical vests, who stare into the camera through their sunglasses and face masks, the sheriff encourages citizens to snitch on their neighbors who may be selling heroin. The video is produced in the same fashion as an ISIS or al-Qaeda video, and those with enough sense are calling the sheriff out for it.

" I thought it was an ISIS recruitment video at first glance! So glad we both moved out of Florida. This DOES NOT make me feel safer!" said one Facebook user.

"Chill out Peyton, you're not Liam Nesson.  Whats with the masks, yeah undercover, then why are you putting them in front of camera at all? Why not put officers behind you that the community knows & likes? This just reminds me of 1 of those horrible ISIS videos, with a bunch of masked men."

The sheriff is so misinformed and blinded by the profitable war on drugs that he clearly fails to realize it's his very tactics that lead to epidemics of overdoses like we are currently seeing.