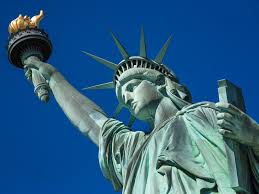 An outsider's generalisation of the American avatar.

The United States has often been touted as a brilliant beacon of liberty, a singular champion for justice and free enterprise. It is a myth often believed by most Americans and those that it has seduced abroad. While the United States in all its stages has been both better and worse in many key areas where liberty is concerned, it is neither the sole dominion for freedom nor has it ever stood as its true champion. It is believed that everything America does as a nation is for a greater good and that its actions are always for some positive, in the end. This American version of its own history and its many influences on the world is as sickly sweet as its subsidised corn syrup. For many in its nation's apparent liberty movement, the discussion of the cost of a cruise missile or a drone strike to the tax payer seems to hold greater importance than the human casualties that such a deadly attack tends to cause for the victims of macho American foreign policy.

Americans tend to look at their history with a bi polar sense of self denial. The segregation of responsibility that exists among many proud and loud Americans allows a continuation of the folly and tragedy wrought by the American sense of exceptionalism. It is assumed that somehow legacy and responsibility for past deeds and conduct, especially the bloodiest and criminal per their own laws, ends with the previous political administrations and regimes. It is a peculiar ability that few exceptional nations possess, to be able to simply drop the national responsibility once a party is elected out of office and it is especially performed on the most majestic scale by the American political organism. No matter how tragic a war may be or how scandalous an event was, it was always the other guys. We voted them out therefore national absolution has been found.

The many acts of domestic and foreign imperialism exhibited by the US government since its very inception are either overlooked or relegated to a marginal status of historical importance or significance often being overshadowed by rhetorical claims and speeches made by the great heroes of those times despite the many cold and bloody facts. The power of belief by both the casual and ardent faithful of the American mythos transcends most zealotry found in other religions. It is an American National religion.

It allows the believer in America to completely isolate entire eras and actions committed by both the Government and large swathes of the populace, to somehow disassociate such terrible experiences from their version of America. While uplifting mere wordplays between political beings are repeated like cultist mantras to exemplify a world that never was or an America that only ever existed inside the faithful's minds.

Those few lone and brave voices for liberty and reason, who at the time were an unpopular minority, somehow become icons of the era. Whether they be abolitionists to slavery, civil rights champions or anti-war protesters, they are given national holidays, iconised in statue and building and while their words are recited as mantras none of what any of them may have once said ever sinks in or takes on a real life. They are iconised alongside the Great Men of history who in their own times sought to suppress and oppress them.