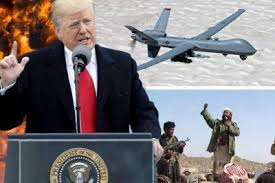 Beyond the clear violation of international law, the practical results are likely to be disastrous, drawing the U.S. deeper into the Syrian quagmire.

But it would be a mistake to focus all the criticism on Trump. Not only are Democrats also at fault, but a good argument could be made that they bear even greater responsibility.

For years, near-total unanimity has reigned on Capitol Hill concerning America's latest villains du jour, Russia's Vladimir Putin and Syria's Bashar al-Assad. Congressmen, senators, think-tank strategists, and op-ed analysts all have agreed that Putin and Assad are the prime enemies of "peace," by which is meant global American hegemony, and that therefore the U.S. must stop at nothing to weaken or neutralize them or force them to exit the world stage.

Until recently, in fact, just about the only politically significant dissenter was Trump. Accusing reporters of twisting the news at a tumultuous press conference in late February, he told them, "Now tomorrow, you'll say, 'Donald Trump wants to get along with Russia, this is terrible.' It's not terrible. It's good."