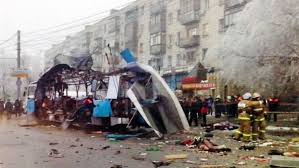 An explosion occurred on a St. Petersburg Metro Train -  between Sennaya Square and the Institute of Technology

Device was an IED with shrapnel - left in a briefcase

A second explosive device has been found and disabled

Russian news reports say that a security camera has caught a person who could be responsible for a blast on St. Petersburg subway.

Update 5: Explosive device was left in briefcase in metro carriage - Interfax. There was no immediate claim of responsibility for the blast.

Update 4: A second device has been found -  Russian anti-terrorism committee says it has found and deactivated a bomb at another St. Petersburg subway station.

The National Anti-Terrorist Committee has confirmed that a makeshift bomb has been found at the Ploshchad Vosstaniya metro station in St. Petersburg and disposed of.

Update 3: The Mail is reporting at least 50 injured including children. Bloomberg reports the device was an IED with shrapnel.

The entire transit system has been shut down as bomb squads and rescuers are responding to the emergency.