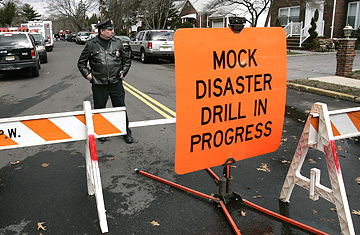 But the government does not care about the citizens and is not interested in keeping us safe. You cannot trust the government, and that is why it is always a bit terrifying to find out they have a Homeland Security exercise planned.

For instance, a bill passed the House of Representatives last Friday "To require an exercise related to terrorist and foreign fighter travel," which would involve multiple agencies training for different scenarios.

One scenario involves preventing a hypothetical American traveling to a  foreign country to pledge their support to the terrorists.

The second scenario outlined, which according to the bill must be included in the training exercise, targets "terrorist infiltration into the United States, including United States citizens."

If the authorization for the exercise passes the Senate, we will be monitoring the available details of where and when it will implemented, because actual terrorist attacks and mass shootings have tended to align with the government's training operations.

Consider the Boston Marathon Bombing, and the very real and undisputed facts about the similarities to a planned Department of Homeland Security exercise planned for Boston two months after the attack.