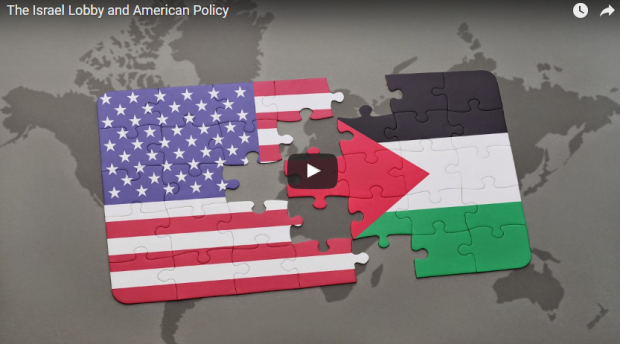 8:00-9:00 AM Registration and "Two Blue Lines": A documentary film screening in the Ballroom. Exhibition hall opens in adjacent Holeman Lounge.

9:40 AM Keynote—Professor John Mearsheimer: What has changed in the decade since his book The Israel Lobby and U.S. Foreign Policy was published. Subsequent findings, foreign policy choices the U.S. makes that it otherwise would not—if not for Israel—and what the new administration could do differently in the future that would better serve broader American interests.

10:30 AM Professor Maria Lahood: Recent legislation that threatens the First Amendment rights of Palestinian solidarity activists in the U.S. and the legal challenges thereto.

11:15 AM Former Congressman Jim Moran (D-VA): What it takes to beat the Israel lobby in Congress.

11:40 AM Former Congressman Nick Rahall (D-WV): How to support the members of Congress who are beginning to listen to their constituents on Middle East policy issues.

1:00 PM Keynote—Hanan Ashrawi: The Israel lobby and the "peace process" from a Palestinian perspective.

1:40 PM Tom Hayes: Challenges and changes in 25 years working on Israel-Palestine issues and advice for independent filmmakers. The documentary producer screens and comments on selections from his latest film, "Two Blue Lines."

2:10 PM Jack Shaheen: Strategies to successfully push back against harmful Hollywood stereotypes about Arabs and Muslims, and the work new generations must now take on.

2:40 PM Wajahat Ali: The intersection of pro-Israel organizations & donors and Islamophobia uncovered as the lead author and researcher of the report "Fear, Inc: The Roots of the Islamophobia Network in America."

4:15 PM Keynote—Professor Ilan Pappé: The value of viewing Israel-Palestine through the lens of settler-colonialism, how Zionist myths have been shaped and/or perpetuated by the Israel lobby, and what framework is necessary to overcome these myths and ensure that efforts to resolve the "conflict" are grounded in reality.

5:00 PM Clayton Swisher: The director of investigative journalism for Al Jazeera Media Network screens and comments on selections from "The Lobby," the four-part series about the Israeli Embassy's covert influence campaign in Britain. This undercover investigation reveals how the Israeli Embassy sought to establish supposedly "independent" pro-Israel groups in England, AIPAC's efforts to establish itself in London, unfounded accusations of anti-Semitism lodged against Labour Party members, and discussions by disgraced former Israeli diplomat Shai Masot to "take down" UK lawmakers deemed hostile to Israel. On February 10, 2017 Professor Hillel Frisch of the Begin-Sadat Center for Strategic Studies staked a claim. Contrary to many media reports – some aimed at discrediting Israel claims Frisch – Israel is in fact not the biggest beneficiary of U.S. military aid. According to Frisch, Israel trails far behind Japan, Germany, South Korea and Italy. Israel aid more resembles that given to Kuwait and Bahrain, according to Frisch...

...The process by which Israel obtains aid – through the activities of a vast domestic lobby it helped establish – reveals why the funds it extracts from taxpayers should not be compared to equally troubling military alliance expenditures. A $3.7 billion, 14,000 employee, 353,000 volunteer Israel affinity nonprofit ecosystem has been built in the United States to provide Israel with the support that following America's own interests would not. The approaching annual spectacle of thousands of AIPAC lobbyists subtly threatening to withhold vast amounts of campaign contributions from members of Congress if they don't provide billions in unconditional taxpayer-funded aid – portrays an entirely accurate picture about the means through which it is obtained.

This Israel lobby-driven process and lack of reciprocity is why US aid to Israel cannot seriously be compared to mutual expenditures – equally unpopular and in need of reexamination – with treaty-bound US allies. More