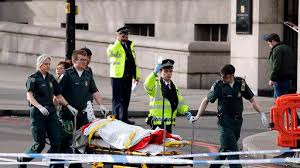 Islamic State claimed responsibility for the attack in a statement issued by its Amaq news agency, but did not name Masood and gave no details. It was not clear whether the attacker was directly connected to the jihadist group.

Police said Masood was born in the county of Kent in southeast England and was most recently living in the West Midlands region of central England.

"Masood was not the subject of any current investigations and there was no prior intelligence about his intent to mount a terrorist attack," the Metropolitan Police said in a statement.

"However, he was known to police and has a range of previous convictions for assaults, including GBH (grievous bodily harm), possession of offensive weapons and public order offences."

Prime Minister Theresa May told parliament the attacker had once been investigated by the MI5 intelligence agency over concerns about violent extremism, but had been a peripheral figure.