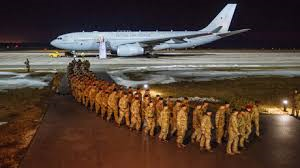 A US-led battalion of over 1,100 soldiers will be deployed in Poland in the beginning of April to deter what is said to be possible Russian "aggression," with the unit's commander stressing that his troops are ready to use lethal force.
The NATO battle group to be stationed in Orzysz, 220 kilometers northeast of the capital, Warsaw, will include more than 900 American troops, around 150 British personnel and some 120 Romanian servicemen, Reuters reported.

"This is a mission, not a cycle of training events. The purpose is to deter aggression in the Baltics and in Poland," US Army Lt. Col. Steven Gventer, the battle group's commander, said.

"We are fully ready to be lethal," Gventer said during a press conference on Monday.