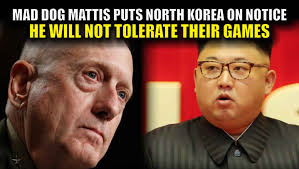 Some 300,000 South Korean and 15,000 U.S. troops have begun their annual Foal Eagle joint war exercises that run through April.

"The two sides are like two accelerating trains coming toward each other with neither side willing to give way," says Chinese Foreign Minister Wang Yi, "Are (they) really ready for a head-on collision?"

So it would seem.

It is Kim Jong Un, 33-year-old grandson of that Stalinist state's founding father, who launched the first Korean War, who brought on this confrontation.

In February, Kim's half-brother was assassinated in Malaysia in a VX nerve agent attack and five of Kim's security officials were executed with anti-aircraft guns. Monday, Kim launched four missiles toward U.S. bases, with three landing in the Sea of Japan.