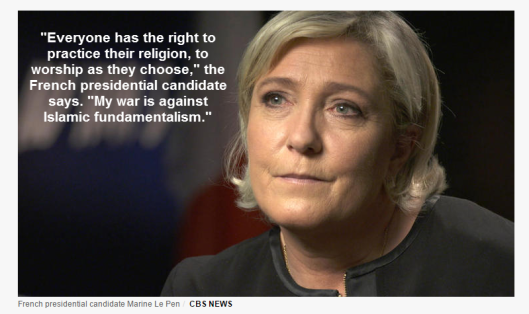 Le pen came across as very presidential. The interview, in French but translated, is sure to boost her standing in the French presidential election on May 7.

CBS has a transcript of the interview at Marine Le Pen Says She's Not Waging a Religious War.

Anderson Cooper: So how do you explain what is happening. Did leaders go too far?

Marine Le Pen (translation): Yes. Yes. Of course they've gone too far. Globalization has become an ideology with no constraints. And now, nations are forcing themselves back into the debate. Nations with borders we control, with people that we listen to, with real economies, not Wall Street economies, but rather factories and farmers. And this goes against this unregulated globalization, wild, savage globalization.