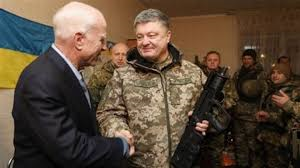 The warlords of Kiev are going on the offensive, violating the terms of the Minsk peace accords, and attacking separatist rebels in the eastern part of the country in a desperate bid to provoke open conflict with Russia. What motivates them is fear of President Donald Trump, who has often expressed a desire to "get along with Russia" and who has openly said Ukraine is not a vital US national security interest. What motivates their new aggression is the possibility that the US subsidies that have kept their vicious war on their own people going – 10,000 killed so far – will dry up.

Ever since US and European Union-backed shock troops overthrew the democratically elected government of President Viktor Yanukovych, the coup leaders in Kiev have waged a relentless war against their rebellious subjects in the east. As "President" Petro Poroshenko put it: