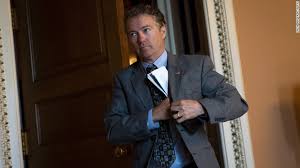 Rand Paul is gearing up for a fight — should President Donald Trump choose the intensely hawkish Elliott Abrams as Secretary of State Rex W. Tillerson's second in command.

"In a country of 300 million people, surely there are reasonable foreign policy experts who have not been convicted of deceiving Congress and actually share the President's foreign policy views," Paul writes in an op-ed for Rare to be published on Tuesday, provided in advance to We Are Change.

The #NeverTrump neoconservative is Trump's rumored pick for the Deputy Secretary of State position, despite his fondness of interventionist policy, and is said to be meeting with the president on Tuesday. Trump is also scheduled to meet with Tillerson at 3 p.m.

Abrams was a staunch critic of Trump throughout his campaign, even warning Republicans to "keep your distance" from the now-president. The area where he was most critical was in foreign policy, calling Trump's non-interventionist stances "dangerous."

He was also convicted for withholding information from Congress during the Iran-Contra affair while serving as assistant secretary of state for Inter-American Affairs under President Ronald Reagan — though he was later pardoned by President George H. W. Bush.

"You can't just brush off being convicted of lying to the Senate when asking for another confirmable job," a senior aide to Paul told We Are Change. "And you can't just dismiss that you have blasted the foreign policy and general qualifications of the President. There are lessons from our recent foreign policy and President Trump has learned many of them. He deserves high level foreign policy staff who have learned them too."