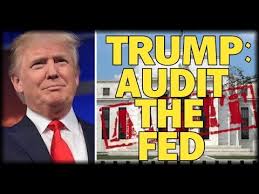 Republican attack on Fed casts doubt over global bank rules Trump-era co-operation uncertain as congressman criticises deals with 'foreign lands' … The future of cross-border co-operation on bank regulation in the Trump era has been thrown into doubt, with domestic pressure mounting on the US Federal Reserve and a senior member of the House of Representatives calling on the central bank not to negotiate new rules at "secretive" international bodies. -Financial Times

There seems to be some question as to whether Trump will move ahead with auditing the Fed. This would be too bad, as those who control a government's money supply basically control the country.

But it certainly seems clear as this article points out, that Trump wants more control over the Fed. The Fed is committing to international agreements that are not signed off on by any formal authority in the US other than the Fed itself.

Ralph Hamers, chief executive of Dutch bank ING, told the Financial Times that he feared the US could pull back from a global agreement on banking regulation, which has been delayed because of divisions on the Basel Committee on Banking Supervision.

"We don't know the position of the Americans any more," Mr Hamers said. "That does mean further uncertainty and uncertainty is never good, it holds back investment and restricts economic growth."  Mr Hamers was speaking after the emergence of a letter to Janet Yellen, the Fed chair, from Patrick McHenry, one of the top five Republicans in the House of Representatives.

The letter, dated January 31, warned that the US's "continued participation" in international forums such as Basel, the Financial Stability Board and the International Association of Insurance Supervisors would depend on meeting the Trump administration's objectives.

We can see from this that Trump wants to sign off on Fed moves. This would constitute a huge change in the way the Fed works. Currently the Fed listens to the President and tries to accommodate him. But when it comes to the nuts and bolts of monetary policy, the Fed has a lot of latitude. At least it did.

The letter asks for, "a comprehensive review of past agreements that unfairly penalised the American financial system in areas as varied as bank capital, insurance, derivatives, systemic risk and asset management." They also want the Fed generally to cease moving forward aggressively without checking with the administration – and others – first.

According to the letter, "Despite the clear message delivered by President Donald Trump in prioritising America's interest in international negotiations, it appears that the Federal Reserve continues negotiating international regulatory standards for financial institutions among global bureaucrats in foreign lands.

"The Federal Reserve must cease all attempts to negotiate binding standards burdening American business until President Trump has an opportunity to nominate and appoint officials that prioritise America's best interests."

The Fed operated "without transparency, accountability, or the authority to do so." The letter was signed by Patrick McHenry who has clout as the vice-chairman of the House financial services committee.