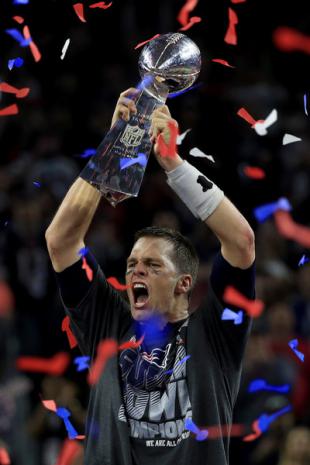 Tom Brady and the Patriots rewrote the history books and the storylines last night with their epic, 34-28 victory against the Falcons in Super Bowl LI. They trailed 28-3 midway through the third quarter before ripping off the greatest comeback in Super Bowl history. Prior to this, the Pats' 10-point comeback two years ago against the Seahawks had set the bar.

Tom Brady completed 43 of 62 passes for 466 yards, two touchdowns and an interception, and he was 12 of 16 for 150 yards on the tying and winning drives in the fourth quarter and overtime. The five-time champion led his 51st game-winning drive in the 51st Super Bowl.

James White scored on a 2-yard run in overtime to cap the greatest performance of his career. He had six carries for 29 yards and two touchdowns and a Super Bowl-record 14 receptions for 110 yards and a score.

The Patriots found a small spark when Brady hit White for a 5-yard touchdown that made it 29-8 with 2:06 remaining in the third quarter, but the comeback truly began with 8:24 to play in the fourth. Dont'a Hightower strip-sacked Matt Ryan, and Alan Branch recovered at the Falcons' 25-yard line. Five plays later, Brady and Danny Amendola hooked up for a 6-yard touchdown, and James White scored a 2-point conversion on a direct snap to make it 28-20.

The Falcons then looked like they'd ice the game by marching to the Patriots' 22-yard line in three plays, but Trey Flowers' sack and Chris Long's forced holding penalty pushed them out of field-goal range.

The Pats took over at their own 9-yard line with 3:30 to play, and Brady found a rhythm after the drive opened with back-to-back incompletions. He hit six of his next seven passes for 90 yards, and White scored a 1-yard touchdown to make it 28-26. Brady then hit Amendola for the 2-point conversion to force overtime for the first time in Super Bowl history.