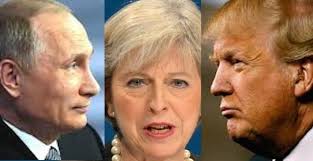 ladimir Putin and Donald Trump will speak directly for the first time since the US president's inauguration in a telephone call on Saturday, the Kremlin has confirmed.

The planned telephone call between the two leaders, which  was earlier reported in US media, has raised nervousness in Europe about the possibility of Mr Trump offering to unilaterally ease US sanctions against Russia.

The meeting comes a day after Mr Trump's meeting with Theresa May, who has said the West should "engage with but beware" of Mr Putin.

Mr Trump's line on Russia is emerging as a major point of difference between the new administration and traditional US allies in Europe, including the UK.

Some Russian diplomats believe Britain and other European governments may try to sabotage a new rapprochement between the Kremlin and the White House.

Mrs May's comments drew a derisory response from the Russian embassy in London, which posted a poem on its Twitter feed about the "Cold War."

Angela Merkel, the German Chancellor,  is also likely to speak with Mr Trump on Saturday.

The conversation is expected to focus on Russia, a source familiar with the matter told Reuters, underscoring European concern that Mr Trump might offer Russia a unilateral deal on sanctions.

"When The Founder Of Bitcoin Comes Out, Bitcoin is Going to 0!" -- Dan Pena