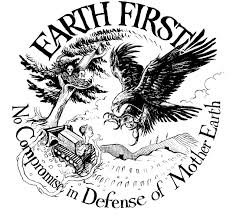 Earth First! Journal describes itself as "the voice of the radical environmental movement," and it is one of the 75 groups identified by Breitbart News within the #DisruptJ20 movement, which hopes to wreak havoc at this week's inauguration of Donald Trump.

As Breitbart News has reported, 75 groups have descended on Washington in order to roil the city, set up blockades at the checkpoints around the parade route, and shut down Washington D.C.'s transportation infrastructure. One of the organizations involved has said that Trump supporters are legitimate "targets" for violence.

The event called #DisruptJ20 has officially called for violent so-called "Black Bloc" protesters to gather at 10:00 am on Friday, January 20th, at Logan Circle in Washington D.C.

Earth First! Journal was one of the earliest advocates of the #DisruptJ20 movement, and it posted a notice about the event on their Newswire section on Nov. 14, 2016, shortly after Trump won the election.

The Earth Liberation Front, or ELF, is a splinter group of Earth First! However, it should be pointed out that Earth First! uses the common leftist dodge of acting as a supposedly "non-violent" front group for the ELF group that allegedly conducts criminal acts.

The Terrorist Resource and Analysis Consortium lists Earth First! on their website and gives some basic background:

James Jarboe, then the Domestic Terrorism Section Chief of the FBI, testified before the House Resources Committee on Feb. 12, 2002 about the group's history:

Disaffected environmentalists, in 1980, formed a radical group called "Earth First!" and engaged in a series of protests and civil disobedience events. In 1984, however, members introduced "tree spiking" (insertion of metal or ceramic spikes in trees in an effort to damage saws) as a tactic to thwart logging. In 1992, the ELF was founded in Brighton, England, by Earth First! members who refused to abandon criminal acts as a tactic when others wished to mainstream Earth First!.

Jarboe testified about some of the group's tactics: