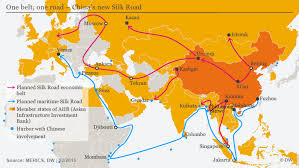 The route known as the 'Silk Road' once helped bring a wealth of goods from China to Europe.

Today, the arrival of a freight train in east London has marked a new era for the 2,000-year-old trading route.

It is the first freight train service from China to the UK.

The train pulled in to Barking after an 18-day journey from Yiwu, a wholesale market town in the eastern Chinese province of Zhejiang.

It had passed through Kazakhstan, Russia, Belarus, Poland, Germany, Belgium and France, finally crossing under the English Channel into Britain.

The consignment would have taken nearly twice as long to reach Britain by sea.

Laden with 68 twenty-foot equivalent containers, the train brought in a cargo of small commodities including household items, clothes, fabrics, bags, and suitcases.

Ten containers were taken off at the German hub of Duisburg.

The remainder arrived in London at Barking's Eurohub freight terminal.