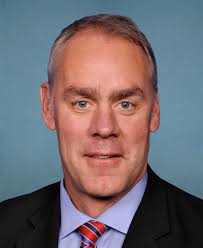 Ryan Zinke, Donald Trump's pick for Secretary of the Interior, is planning to drill on public lands, set aside largely for outdoor recreation and conservation purposes.

During his confirmation hearing on Tuesday, the former Navy SEAL commander and sole representative from Montana in the House of Representatives, talked about both his strong support of public lands, and the drilling and mining he wants to do on them. He is widely seen to be Trump's vehicle to carry out an aggressive domestic fossil fuel strategy.

Throughout the hearing, Zinke tried to paint an image of a man who is a steward of public lands and the environment, despite his fossil fuel-friendly ideas. In response to a set of curt questions on the sale of public lands from Senator Bernie Sanders, Rep. Zinke said, "I am absolutely against the transfer or sale of public lands. I can't be more clear."

Montana and many other states' economies in the West, rely heavily on hunting, skiing, biking and other forms of outdoor recreation, so public access to federal lands where people can engage in these activities is gospel.

The Department of the Interior and other federal agencies own almost a third of the land and mineral estates out West. This gives Zinke plenty of leverage, and opportunities, to turn them into sources of revenue. Zinke argued that recreation and mining on public lands do not have to be in conflict and attempted to draw upon Teddy Roosevelt's view of a "multiple use" approach to federal lands.

Throughout the hearing, Zinke pressed his and Trump's assertion that the United States must become energy independent. Yet most of his energy concerns focused on fossil fuels, particularly coal. "The war on coal, I believe is real," he remarked, and strangely linked coal to clean energy, saying, "We should be leading the world on clean energy tech and I believe coal can be a part of that."

Despite Rep. Zinke's stated beliefs about keeping public lands public, his recent voting record coming into today's hearing seemed to contradict him. On January 3rd, he voted in favor of a House Republicans measure that would allow federal land transfers to be essentially cost-free and budget-neutral—practically greasing them up for oil drilling and development.