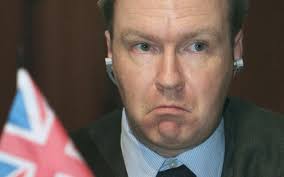 As The FT reports, Rogers did not explain the reasons for the move, according to people who have seen his note to diplomatic staff. Sir Ivan played down the decision, saying he was leaving a few months earlier than his original departure date of November.

Since his appointment in late 2013, Sir Ivan was one of the leading advisers in former prime minister David Cameron's pre-referendum renegotiation of EU membership terms and in his successor Theresa May's preparations for Brexit.

While he had a longstanding relationship with Mrs May and was consulted by her on the government's Brexit strategy, Sir Ivan's relations with some of the prime minister's team began to deteriorate in recent months.

This culminated in December with a leak to the BBC of Sir Ivan's advice to the prime minister suggesting it could take until the early mid-2020s for the EU to agree and ratify a comprehensive trade deal with Britain.

Although the advice was months old and reflected Sir Ivan's conversations with senior EU officials, the leak prompted a series of negative articles in the pro-Brexit newspapers. The Daily Mail reported that "knives were out" for Britain's ambassador to the EU because of his "gloomy pessimism".

Cable is lower this morning, and while Rogers was highly regarded by other EU ambassadors, who expected Sir Ivan to see through the Brexit negotiations, it does not appear to have legged lower on this news.