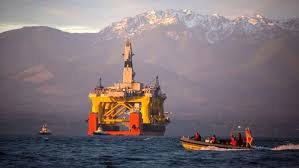 Invoking a rarely used provision in federal law, the Obama administration on Tuesday announced a permanent ban on offshore drilling in broad parts of the Arctic and Atlantic coasts — a sweeping and controversial move that will help secure the president's environmental legacy even as critics vowed to reverse it.

The ban relies on the Outer Continental Shelf Lands Act of 1953, which says the president "may, from time to time, withdraw" federal waters from oil and gas development that are not already leased. It was announced as part of a joint action with Canada, where Prime Minister Justin Trudeau also made long-term, though not permanent, commitments to protect the Arctic from drilling.

Obama cited the Arctic's "unique ecosystem," the risk of damage from a spill, the high cost of working in the remote and frigid region and concerns about climate change.

"It would take decades to fully develop the production infrastructure necessary for any large-scale oil and gas leasing production in the region – at a time when we need to continue to move decisively away from fossil fuels," the president said in a written statement.