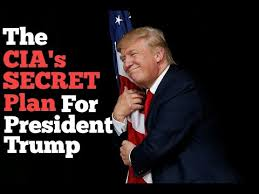 The coup is orchestrated by the camp of Hillary Clinton in association with the CIA and neoconservative powers in Congress.

The plan is to use the CIA's "Russia made Trump the winner" nonsense to swing the electoral college against him. The case would then be bumped up to Congress. Major neocon and warmonger parts of the Republicans could then move the presidency to Clinton or, if that fails, put Trump's vice president-elect Mike Pence onto the throne. The regular bipartisan war business, which a Trump presidency threatens to interrupt, could continue.

Should the coup succeed violent insurrections in the United States are likely to ensue with unpredictable consequences.

The above theses are thus far only a general outlay. No general plan has been published. The scheme though is pretty obvious by now. However, the following contains some speculation.

The priority aim is to deny Trump the presidency. He is too independent and a danger for several power centers within the ruling U.S. power circles. The selection of Tillerson as new Secretary of State only reinforces this (Prediction: Bolton will not get the Deputy position.)  Tillerson is for profitable stability, not for regime change adventures. The institutional Trump enemies are:

The CIA which has become the Central Assassination Agency under the Bush and Obama administrations. Huge parts of its budgets depend on a continuation of the war on Syria and the drone assassination campaigns in Afghanistan, Pakistan and elsewhere. Trump's more isolationist policies would likely end these campaigns and the related budget troughs.

The weapons industry which could lose its enormous sales to its major customers in the Persian Gulf should a President Trump reduce U.S. interference in the Middle East and elsewhere.

The neoconservatives and Likudniks who want the U.S. as Israel's weapon to strong arm the Middle East to the Zionists' benefit.

The general war hawks, military and "humanitarian interventionists" to whom any reduction of the U.S. role as primary power in the world is anathema to their believes.