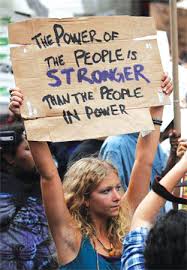 Yes, America, it is possible to use occupations and civil disobedience to oppose government policies, counter injustice and bring about change outside the confines of the ballot box.

It has been done before. It is being done now. It can be done again.

For example, in May of 1932, more than 43,000 people, dubbed the Bonus Army—World War I veterans and their families—marched on Washington. Out of work, destitute and with families to feed, more than 10,000 veterans set up tent cities in the nation's capital and refused to leave until the government agreed to pay the bonuses they had been promised as a reward for their services.

The Senate voted against paying them immediately, but the protesters didn't budge. Congress adjourned for the summer, and still the protesters remained encamped. Finally, on July 28, under orders from President Herbert Hoover, the military descended with tanks and cavalry and drove the protesters out, setting their makeshift camps on fire. Still, the protesters returned the following year, and eventually their efforts not only succeeded in securing payment of the bonuses but contributed to the passage of the G.I. Bill of Rights.

Most recently, after months of protests over the construction of a pipeline that members of the Sioux tribe insisted would harm their water supply, the Army Corp of Engineers has agreed to look for an alternate route for the Dakota Access Pipeline to cross under Lake Oahe in North Dakota.

This kind of "power to the people" activism—grassroots, populist and potent—is exactly the brand of civic engagement John Lennon advocated throughout his career as a musician and anti-war activist.

It's been 36 years since Lennon was gunned down by an assassin's bullet on December 8, 1980, but his legacy and the lessons he imparted in his music and his activism have not diminished over the years.

All of the many complaints we have about government today—surveillance, militarism, corruption, harassment, SWAT team raids, political persecution, spying, overcriminalization, etc.—were present in Lennon's day and formed the basis of his call for social justice, peace and a populist revolution.

Little wonder, then, that the U.S. government saw him as enemy number one.

Because he never refrained from speaking truth to power, Lennon became a prime example of the lengths to which the U.S. government will go to persecute those who dare to challenge its authority.

Lennon was the subject of a four-year campaign of surveillance and harassment by the U.S. government (spearheaded by FBI Director J. Edgar Hoover), an attempt by President Richard Nixon to have him "neutralized" and deported. As Adam Cohen of the New York Times points out, "The F.B.I.'s surveillance of Lennon is a reminder of how easily domestic spying can become unmoored from any legitimate law enforcement purpose. What is more surprising, and ultimately more unsettling, is the degree to which the surveillance turns out to have been intertwined with electoral politics."

Years after Lennon's assassination, it would be revealed that the FBI had collected 281 pages of surveillance files on him. As the New York Times notes, "Critics of today's domestic surveillance object largely on privacy grounds. They have focused far less on how easily government surveillance can become an instrument for the people in power to try to hold on to power. 'The U.S. vs. John Lennon' … is the story not only of one man being harassed, but of a democracy being undermined."

Such government-directed harassment was nothing new.

The FBI has had a long history of persecuting, prosecuting and generally harassing activists, politicians, and cultural figures, most notably among the latter such celebrated names as folk singer Pete Seeger, painter Pablo Picasso, comic actor and filmmaker Charlie Chaplin, comedian Lenny Bruce and poet Allen Ginsberg. Among those most closely watched by the FBI was Martin Luther King Jr., a man labeled by the FBI as "the most dangerous and effective Negro leader in the country."

In Lennon's case, the ex-Beatle had learned early on that rock music could serve a political end by proclaiming a radical message. More importantly, Lennon saw that his music could mobilize the public and help to bring about change.

For instance, in 1971 at a concert in Ann Arbor, Mich., Lennon took to the stage and in his usual confrontational style belted out "John Sinclair," a song he had written about a man sentenced to 10 years in prison for possessing two marijuana cigarettes. Within days of Lennon's call for action, the Michigan Supreme Court ordered Sinclair released.

While Lennon believed in the power of the people, he also understood the danger of a power-hungry government. "The trouble with government as it is, is that it doesn't represent the people," observed Lennon. "It controls them."

By March 1971, when his "Power to the People" single was released, it was clear where Lennon stood. Having moved to New York City that same year, Lennon was ready to participate in political activism against the U. S. government, the "monster" that was financing the war in Vietnam.