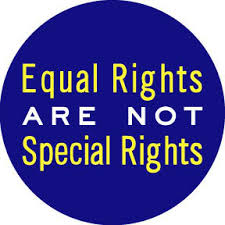 Rights for people "of color" (the translucent ones had better shut up and sit down).

Rights for the "differently abled."

Rights defined by the "community" – the collective – you're (supposedly) a member of.

These aren't rights. They are grievances. A demand – based on group identification – that a need must be serviced. For example, the "transgendered" asserting their "right" to access the bathroom of their choosing.  Notice that this supposed "right" imposes an obligation on others to provide a material benefit. This is a clue that the "right" being asserted is, in fact, wrong.

A good way to make sense of rights – real ones – is to view them from an economic perspective. As a species of property.

As a function of ownership.

We can start with a proposition that's pretty self-evident: We each own ourselves exclusively. Our physical bodies are our property. Who else can lay claim to ourselves? (Possibly, God – if such a being exists. But whether he does – or does not – the point is that other people aren't god. And other people don't become gods by becoming government officials.)

By having the power to direct (or constrain) his acts.

By having the power to make him work for your benefit, contrary to his will. To take from him that which was created by his body or produced by his mind.

Thus, I have the right to use my body to do physical work – such as build a structure. Or use my mind to produce the wealth necessary to pay others to do that work for me using their bodies. No one's rights have been violated – no slavery is involved – because each person is freely using (or bartering the use of) their own property – their bodies, their minds – toward an object each wishes to see realized.